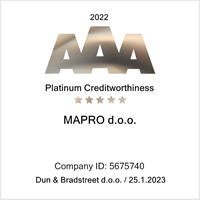 There are several types of cylinder seals. They vary according to their shape, material and installation method as well as the operating temperature range and pressure of the hydraulic cylinder. Hydraulic seals decrease loss of liquids in hydraulic parts, which is why they have an important impact on the efficiency of hydraulic systems.

Main types of hydraulic seals are:

Rod wipers or wipers are installed in the head of a cylinder and serve as a prevention for the ingress of dirt in internal parts of the cylinder, while the piston rod returns into the pipe of the cylinder – when it operates in the direction of the traction.

Semicompact rod seals are similarly installed in the head of a cylinder to provide sealing during the movement of the piston rod and thus hold the oil in the cylinder so it doesn’t flow it.

Piston seals are installed on the piston itself and provide sealing of the cylinder from inside when oil flows in it in order for the piston rod to have power while tractoring/pushing.

Rod/piston seals can be used for sealing of a piston or piston rod, since a sealing lip is on both sides of the seal.

Static seals are not in motion and they are not a component in which a seal is installed. Seals do not move and are loaded only by pressure and not by speed.

V seals are used for the sealing of uneven or eccentric surfaces of piston rods. They protect internal parts from dust, dirt, grease, etc.

Guide rings are used in a head as well as on the piston of a cylinder. They can guide a piston rod or a piston. We offer pre-manufactured guide rings for certain sizes of pistons/rods and guide rings of various thickness and width that can be cut to a desired dimension.

O-seals and anti-extrusion rings are used on the external side of the cylinder head and prevent the ingress of dirt in the cylinder and effluxion of oil from the cylinder.

Rotary seals serve for the sealing of piston rods and pistons that rotate. They are installed in the head as well as in the piston of a cylinder.

Seals for flanges are used for the sealing of two flanges together, while one flange has a slot in which the seal is mounted.


A new catalogue is being prepared.